Alfred the Great is the only English monarch to be granted with the righteous entitlement of ‘Great’. Like the great Macedonian leader Alexander, Alfred helped to demonstrate qualities of sheer greatness. Alfred was a descendant of Cerdic of Wessex, the first of the Anglo-Saxon kings and a relation of chieftain of the gods, Odin. Alfred was the king of Wessex from c.871 – 886 and subsequently king of the Saxon kingdom, c.886 – 899 AD. Of course, Alfred is mostly known for his efforts in defending Anglo-Saxon England from the tyranny’s permeated by the Viking invaders. Most notably, it was under Alfred’s jurisdiction that literacy and education had become vastly promoted and also the publications of the Anglo-Saxon Chronicles. 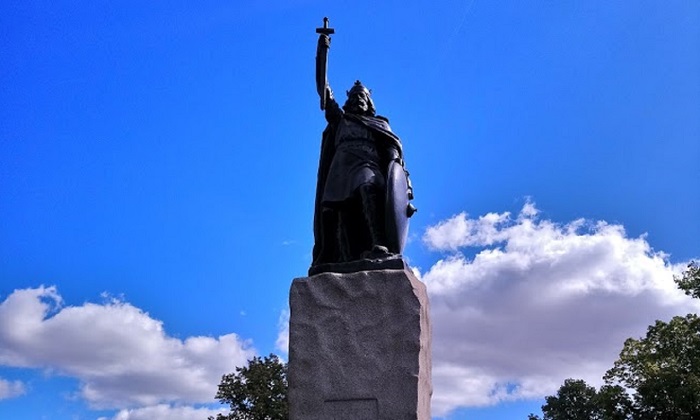 Alfred’s reputation still stands high with historians, though few would now want to follow Edward Freeman in claiming him as the most perfect character in history.’ Having usurped to the thrown after his three older brothers, for several years, Alfred faced numerous invasions from Vikings. At the Battle of Edington in c.878, Alfred prevailed having defeated the Great Heathen Army and its Danish leader, Guthrum. The event resulted in the establishment of the Treaty of Wedmore along with Danelaw in the same year. ‘He successfully defended his kingdom against the Viking attempt at conquest, becoming the dominant ruler in England.’
What most people seem to forget about Alfred is his role in theology. Alfred promoted himself as the virtuous defender of the Christian doctrine in England. At the time, the dystopian regime pervaded by the Viking invaders brought with it Paganism, an opposition to Christianity. ‘The Honourable Protector’ was an extremely devote clergyman having at the age of 4, visited the pope in Rome and was supposedly blessed to rule. ‘He paved the way for the future unity of England, which was brought to fruition under his son and grandsons, who conquered the remaining areas held by the Vikings in the east and north, so that by the mid-tenth century the England we are familiar with was ruled as one country for the first time.’
Alfred was also an individual of immense intellectuality. He was able to translate Latin into Old English and established one of the first known ‘law-codes’. Schools were in the highs of proliferation allowing ‘future generations of priests and secular administrators’ to study. ‘Alfred also had the foresight to commission his biography from Bishop Asser of Wales.’ Alfred (well it is believed anyway) wrote his very own epitaph for ‘Consolation of Philosophy’ by Boethius. He was indeed not only a ‘Great’ king but also a ‘Great’ man. ‘Alfred was the ‘truthteller’, a brave, resourceful, pious man, who was generous to the church and anxious to rule his people justly.’
Tweet Pin It
Share on Facebook Share
Share on TwitterTweet
Share on Pinterest Share
Share on LinkedIn Share
Alfred the Great