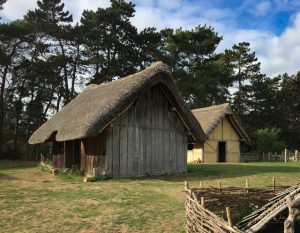 The original principles of settlement regarding the Anglo-Saxons conquered or contested territories of Britannia (England) in the 5thcentury, rests upon two main foundations established by their Germanic heritage; first, the possession of land; secondly, the distinction and privileges attached to the titles of rank; together, the public law of every Teutonic tribe implies both principals are more or less dependent upon each other.

The modus operandi regarding the first foundation, the possession of land, was known as the ‘Mark System’; this system was the introduction of the Teutonic method of holding and cultivating the land; and is a social institution which rests upon the freemen having equal partnership in the tenure and cultivation of land. The word attributed to this system, ‘Mark’, is considered to have a twofold meaning attached to it; first, a division of territory belonging to a settlement that was originally developed by tribal kindred known as the Mægth, commonly spelt mæ̂gþ in Old English; secondly, the legal jurisdiction of public law , written or understood, which attempted to protect the inhabitants guarantee of life, honour, and peaceful possession of land; historian John Mitchell Kemble’s The Saxons in England stated “these are the incunabula, first principles and rudiments of English law”.

A Mark is a self-governing community which is decentralised from the Anglo-Saxon race at large; only with the initiation of growing Marks will we start to see a shift in governance with Marks coalescing into a Gà or scīr (a district identified with a shire), or coalescing into a kingdom – both divisions being achieved through rival subjugating of superior Marks or united into common unions.

Originally the word ‘Mark’ was more commonly expressed by the word ‘March’ or ‘Mearc’ in Old English; the definition meaning ‘boundary’ or ‘sign of a boundary’ and therefore, in its simplistic term, signified a borderland between tribes, and/or a neutral/buffer zone under joint control between neighbouring Marks. Today’s spelling of the Kingdom of ‘Mercia’ took its name from the West Saxon word ‘Mearcian’, meaning ‘determine boundaries’ or ‘fix boundaries’. ‘Mięrce’ is another variant spelling of Mercia or Mercians. Albeit a popular interpretation of Mercia includes ‘boundary folk’ or ‘men of the Marches’ – considering that the frontiers of the Kingdom’s western borders lay parallel to the Welsh Marches. Even though Old English had four main dialects with different variations of the word denoting ‘Mercia’, under Wessex supremacy of the unification of the Anglo-Saxon kingdoms, the language of government and literature become standardised of the West Saxon dialect, therefore today’s spelling of ‘Mercia’ deriving from ‘Mearcian’.

The land within the territory of a Mark belongs entirely to a community of a tribe or Nation (Mægth), who annually allotted the arable land among kindred freemen, also referred to as Markmen, while having common rights to the pastures consisting of the forest and meadows. At the centre of a Mark would typically be a clearing where the Mægth would establish a settlement for farming; enclosed by a thick belt of forest or waste which signified the separation of boundaries or acted as a form of a natural bulwark which protected the communityfrom rivals.

Originally the surrounding forest was under the protection of the Anglo-Saxon gods, and their solemn religious ceremonies at first enacted limitations where its sanctity must not be violated. Although its indivisibility of being render as a Bulwark, and of its utility as a pasture, the encroachment of Christianity eventually destroyed or diminished the holiness of the forest, consequently making it easier for the growth of Marks to start clearing the forest for the purpose of productivity – transforming the cleared forest into folcland (public land) or as a source of private land for the Markmen. The custodians were bound in maintaining the newly cleared section of forest and therefore must not be encroached upon; if forest-trees sprung up due to neglect by the occupant, the cleared land once again returned to its natural state of a forest, and, as such, subject to all common rights of the Markmen, whether in pasture, land reserved for hunting, or estovers.

The sanctity of the forest, as its name denotes, was also distinguished by marks or signs; trees of peculiar size and beauty with carved figures of birds and beasts, or perhaps even with runic characters, operated for the purpose of limitations and definition, also known as a mark-tree: striking natural features, for instance, a hill, a brook, a rock, or an artificial mound of an ancient warrior, warned an intruder to abstain from dangerous territory, or taught the herdsmen how far he might advance with impunity. In the wetlands or other water bodies, poles were placed within them and were the equivalent to a mark-tree of the forest; removing them was deemed impious.

As earlier described, the settlers of a Mark were originally founded by the Mægth; a fellowship bounded by a community of families or households who rallied under an officer of its own lineage and appointment. They served together as military adventures whose custom was to distribute the spoils of war as a reward for their valour and military service.

Although the Mægth is considered a warband of warriors, or a comitatus as described in the monograph by Roman historian Tacitus titled Germania (Latin: De Origine et situ Germanorum); and in Julius Caesar’s memoir The Gallic Wars (Latin: Commentarii de Bello Gallico); under settled principles, the union of great families or households, depending on the size of the Mark, could rally in an emergency a respectable force into the field; in general a hundred heads of houses would protect the rights and privileges of the Marks inhabitants, but not necessarily always consisting of a hundred.

They were referred to as Markmen and incorporated households of various degrees of wealth, rank and authority; some were in direct decent from a common ancestor, or a hero from a particular tribe; others more distinctly related through the natural growth of the population but drifted further apart from the original stock: whether admitted into communion by marriage, adoption, or emancipation from serfdom; all were recognized as a brotherhood or kinsmanship. They stood together as one unit who followed the same leaders and were known to themselves and neighbours by one general name, which was usually attached to their settlement’s placename. Further details of marks relating to placenames are in volume I of Kemble’s The Saxons in England appendix A:

The Markmen occupied the allodial and private estates of the Mark and were considered to come from noble stock among the Mægth. They were independent within their own limit but were sufficient in their own support and defence. They seized full power of authority to regulate their own affairs which seemed conducive to their own advantage; they also administered justice among themselves according to public law; and without their consent no man could settle in its territory, build a home, or purchase a share of another.

Kemble appropriately called them ‘The Court of the Markmen’ whose service to such a court was not less the duty, than the high privilege of the free settlers. He further commented in regards to the continent, that the jurisdiction of the Germanic Marks inferred in many cases that the later courts of the great landowners had been in fact the first Markcourts, in which, by either inheritance or election, a Lord was the first Markmen and the patron or defender of the simple freemen. Therefore, the old Markcourt are considered the predecessor of a Lord’s court.

As every Mark became a political entity: the Markmen had a place in the assembly of the Marcourts. From what we can gather from earlier historians is that the Mark System operated as the earliest form of local governance among the Anglo-Saxons, which encompassed the arming of its own defence, administration of its own laws, and regulating its own affairs within accordance to the distinction and privileges of the various ranks of its inhabitants: which incorporated the classes of the noble, the free, and the serf. Although the Mark was originally a voluntary association of kindred freemen, they strictly maintained the Mark System and excluded all who were not born or adopted into the institution. In Old English Markcourt is spelt Mearcmót, meaning “place where the assembly of a district was held”; while a Mearcbeorh, appears to denote a hill or a mound as the site of the court’s assembly.

Although the Mark System was introduced into England as far back as the 5th century, its principles and modus operandi has left a forgotten foundation which has shaped English society and its institutions. Today’s England may not be an exact imprint, however, it is disingenuous to suggest that England was civilized under the iron first of the Roman Empire who subjugated the backward-knuckle-dragging Brittonic Celts into the so-called ‘civilized world’.

Indeed, the Romans did influence the Brittonic Celts, for example their laws, governance, and engineering. However, the Brittonic Celts already had roads, settlements, art, a superior connection with nature, or displayed heroic military defiance: one notable act for example was the repelling off Julius Caesar’s first invasion, which resulted in their chariots having a detrimental impact on Caesar’s Legions. Only the resourcefulness and meticulous administration of an empire helped forge and maintained the legions of Rome into a well-disciplined army, who eventuality annexed England into a province.

The next era of history in the forefront of ‘civilizing’ England, came in 1066 when the Normans implemented the feudal system and later introduction of the code of chivalry. Never mind the fact, you can find the bases of the Norman feudal system in the Mark System; or how duty and honour towards kinship was entrench into Anglo-Saxon society long before chivalry was introduced, especially that the code of chivalry was a combination of the militant Old Testament of Christianity and Teutonic heroic values – Christianity and Teutonic heroic values was already in Anglo-Saxon society.

If we take a deeper look at the Anglo-Saxons, not just todays watered-down-cherry-picked version of a handful of prominent kings, the heptarchy; or them being overshadow by the Viking invasions and 1066; the once-loved Anglo-Saxons in the minds of the intelligentsia of the 1800’s, where some might say were guilty of romanticizing the Anglo-Saxons, or maybe I’m just as guilty as the Georgians and Victorians; nevertheless, we can’t negate what influences the Anglo-Saxons and their Germanic heritage had installed within the English Nation, including the Mark System and its Markmen.

The Saxons in England – volume I by John Mitchell Kemble

The Constitutional History of England – volume I by William Stubbs

The Student’s Dictionary of Anglo-Saxon by Henry Sweet