Made from one piece of red sandstone, Irton Cross can be found in St Paul’s Church Graveyard.

St Paul’s Church is in the Parish of Eskdale, Cumbria and is an active church.

This Anglo-Saxon cross dates back to the 9th century and remarkably is still in one solid peice of rock.

Not only withstanding time and the elements, Irton Cross also survived the invasions from the vikings whilst many religious monuments would have been desecrated.

The reason for the erection of the cross in St Paul’s Church is still unknown and is rare in it’s design having no markings, scripture or links to any king. 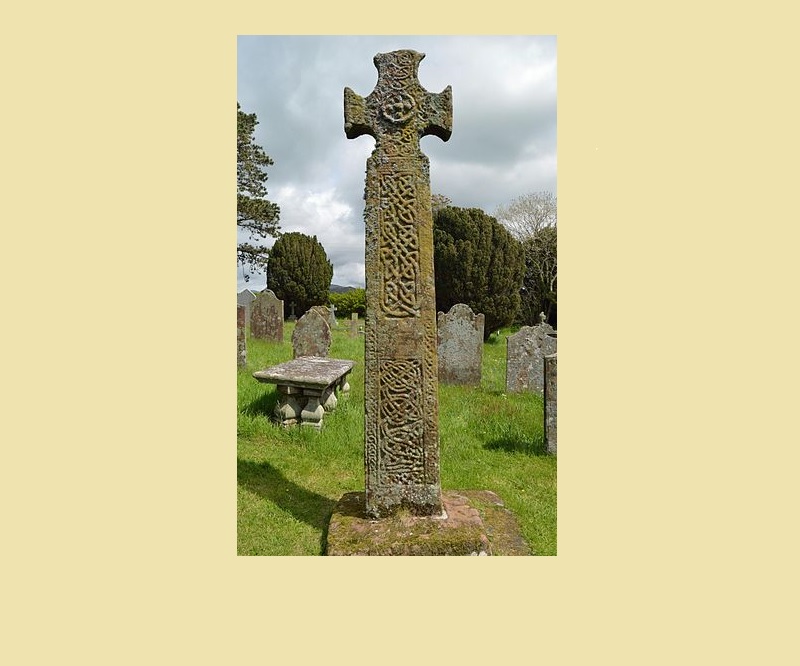 What can be seen is very weather worn decoration which has historians baffled as to who placed it.

Some suggest Danish invaders but the patterns resemble more of the Celtic style of inscription.

Even when the original church was destroyed back in 1865, this 10 foot high unmarked cross was left untouched and to remain in situ.

Found at the top of the Irton Cross is the main cross-head which bosses carved from the centre raised.

Most of the original markings on the Irton have been weathered away although some are still visable.

It is possible that the Saxons have added markings over the original ones as some of the design matches what you would find from their era.

Dotted petted work can be found on the cross and overlapping circles which points to the Saxon era.

What can be described as ‘beasts’, almost monster-like animals can be seen on the cross which is also a possible link to Saxon carvings.

Various other patterns can be seen on the cross at St Paul’s Church including diamonds, spiral shapes, moldings and scrollwork.

The parish at Irton, Eskdale, has laid claim that the cross is of Celtic origin and is most likely correct.

Possibly a meeting place for raiding parties, these theories are the strongest and most likely due to the size and dominance of the cross.

With Irton being within easy reach for the Celts this would be the strongest theory but as of today is still not a concluded fact.

For those planning a visit to the Irton Cross you will find not just St Paul’s Church but Irton itself to be a quaint town.

Set in stunning grounds the church is surrounded by greenery and makes a nice destination to ike to and you get to see the Irton Cross in all its splendor.

Cumbria has many sights and attractions to visit and a strong Saxon background.

Many are free to visit and those like Irton Cross at St Paul’s Church are open to visit all year round.

St Paul’s Church is a grade one listed building and you are welcome to attend the Sunday service which can be combined with your trip to the Irton Cross.