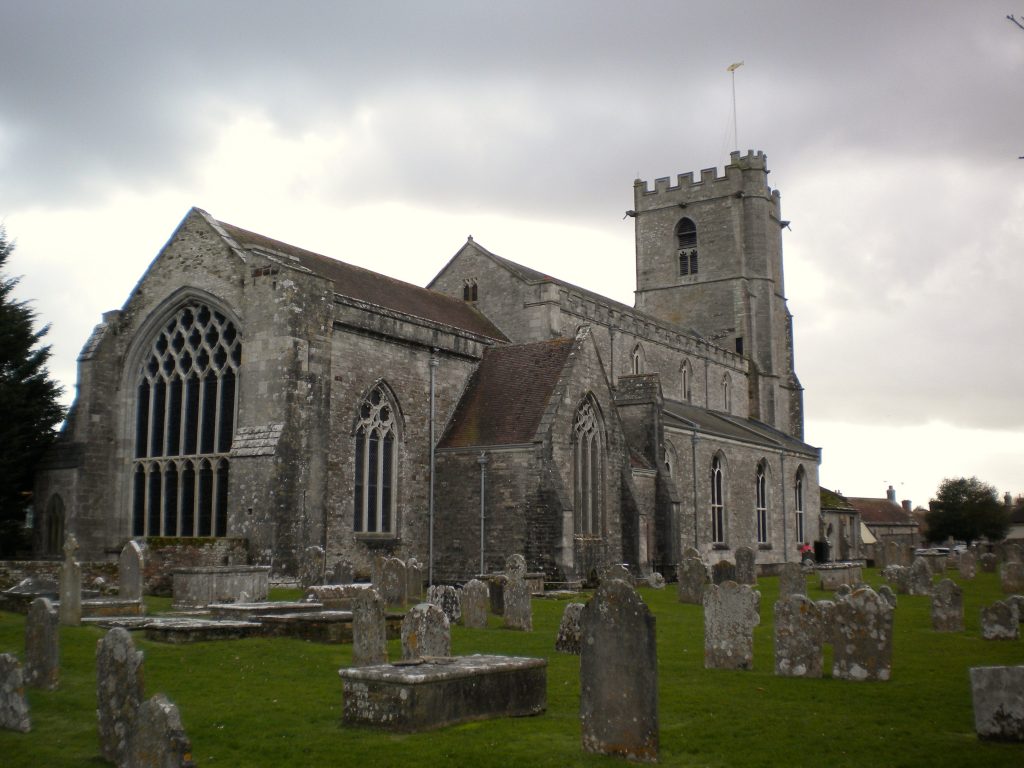 The Grade I listed building of Lady St. Mary Church is a parish church situated to the south east of the market town of Wareham, Dorset; parallel to the Priory Hotel and a stone throw away from Wareham’s Quay and the River Frome.

Originally the church was attached to a priory of a Benedictine Nunnery that was possibly established in AD 672. But Lady St. Mary itself, has two possible dates regarding its inception.

Firstly, according to 12th century historian William of Malmesbury, St. Aldhelm had founded a church that was ‘close’ to Wareham Town. However, Lady St. Mary is mainly accepted to be the most likely site for St. Aldhelm’s church.

The pious Aldhelm is notable for introducing Benedictine rule during his Abbotship at Malmesbury Abbey, appointed in AD 675. This fact coincides with Wareham already having a site of a Benedictine Nunnery.

Therefore, if William of Malmesbury is correct, Lady St. Mary would have been built during St. Aldhelm’s Abbotship (AD 675 to 709), but realistically this would have been during the years of his prime.

And secondly, more recent scholars have dated the ancient minister of Lady St. Mary as being founded in circa AD 800. Dr Richard Gem details this in the journal of the British Archaeological Association volume 146.

The priory was destroyed during the Danish raid of Wareham in AD 876. Princess Ælfthryth (Alfrida) is reported to have rebuilt the priory in circa AD 900; she is the daughter of King Alfred the Great, and married the Margrave of Flanders, Baldwin II, changing her status as Princess Ælfthryth of Wessex to countess of Flanders.

The size of the old Anglo-Saxon building was very much the size of the present Lady St. Mary and survived, in large, until the mid-19th century where unfortunately most of the Anglo-Saxon architecture (the nave) was demolished prior to the rebuilding in 1841 to 1842.

Other sections of the church were built at different periods – St. Edward’s Chapel in the 12th century; the chancel, including Becket Chapel and vice, are early 13th century; the west tower is probably early 16th century, for example. The style of the church is mainly of Norman/Gothic architecture.

In 1864, two watercolour paintings were based upon sketches made before the churches partial demolition and gives us the general impression of the old building which shows the Anglo-Saxon nave, although this may not be reliable in matters of detail.

These five stone slabs are believed to be memorials originally erected in the cemetery of the Saxon Monastery, or from a Briton church that preceded it, presumably on the same site.

–  images of the stone slabs: https://www.british-history.ac.uk/rchme/dorset/vol2/plate-165

The church is made of Purbeck limestone which consists both ashlar (the tower) and rubble. The roofs are covered with slate tiles, with the nave and tower having embattled parapets. The nave is a four-bay nave flanked by two aisles; the west walls of the aisles are considered Saxon.

The south-west porch is now the vestry, and has a small reset 14th century cinque-foiled ogee head window on the west wall. The west entrance porch of the tower has diagonal buttresses, a mould plinth, and a parapet with four moulded square panels above a stringcourse on the west face.

The impressive long chancel was enlarged circa 1325, the east wall has an exceptionally large stained-glass window with seven trefoiled and transomed lights with net tracery in a four-centred head and cusping below the transom. It was installed by Clayton & Bell between 1886 and 1890, including the window on the eastern wall of the tower. 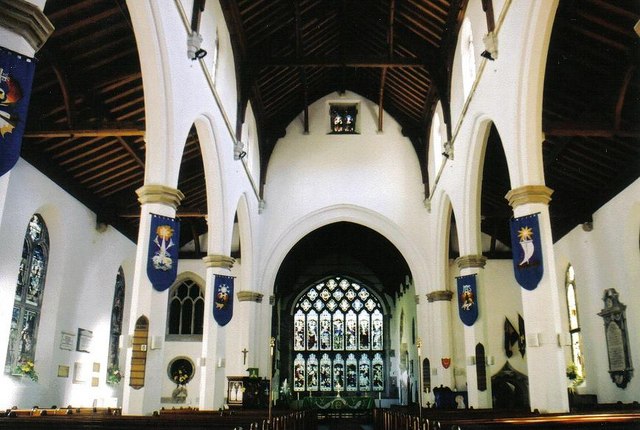 To the north of the Chancel is the organ chamber and was designed and built by Crickmay of Weymouth in 1893. It was funded by James Dugdale, the brother of Mrs. Rodgett, who dedicated the construction of a three-manual organ to the memory of her armature musician husband in 1883; although modern alteration has been added. The organ room has a reset 14th century window on the north wall.

To the south of the chancel is ‘St. Edwards Chapel’ and was built in circa 1100. Originally the chapel was a single storey which included a floor that was lowered three feet below the nave. 13th century additions of the vaulting, vaulting shafts, and an upper floor were added to the original building of circa 1100.

For more details about the interior and exterior, please go to the source links provided at the bottom.

A Resting Place Fit For A King

Lady St. Mary is believed to be the site where two kings from the notable House of Wessex are said to have been buried here. This royal house is uncommonly, but also known as the Cerdicingas Dynasty.

King Beorhtic is purported to have been buried at Wareham (Lady St. Mary) in AD 802 and in the documentary source of the Anglo-Saxon Chronicles, details King Edward the Martyr as being buried at Wareham without any royal honours in AD 978.

As detailed in the account of the Anglo-Saxon Chronicles, King Edward was murdered at Corfe Castle. Below is an extract from the translated version of James Ingram:

‘AD 978 … this year was King Edward slain, at eventide, at Corfe-gate, on the fifteenth day before calends of April. And he was buried at Wareham without any royal honour. No worse deed than this was ever done by the English nation since they first sought the land of Britain…’

King Edward ‘s resting place at Wareham was however short lived. In AD 980, Alderman Ælfhere translated his remains from Wareham to Shaftsbury Abbey and was reburied in a lavish public ceremony. 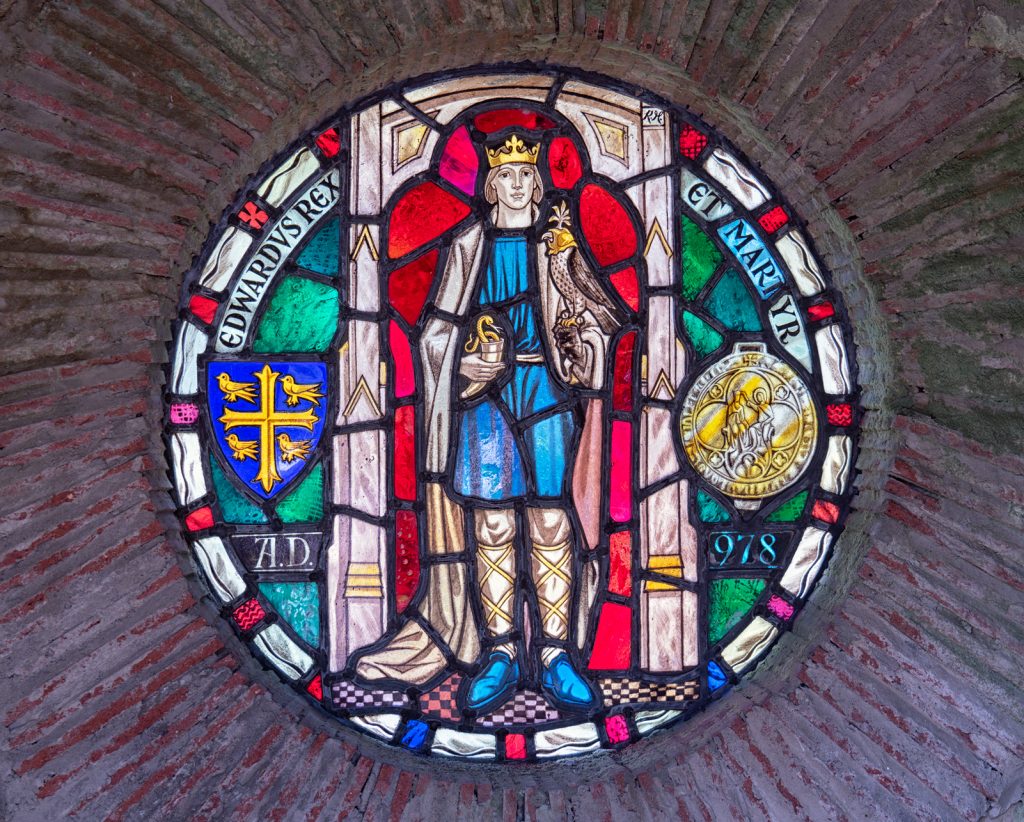 by Orionsm, stained glass window of Edward the Martyr in the grounds of Shaftesbury Abbey Museum and Gardens, via Flickr https://www.flickr.com/photos/orionsm/50206740393/in/photolist-2juAEK4

Unfortunately, only the west walls of the two aisles are considered Anglo-Saxon, and this is the only architecture of Lady St. Mary which has survived from this period of history. It is a great shame that the Victorians did not consider preserving the Anglo-Saxon nave, which would have been a great addition to the Anglo-Saxon town of Wareham.

But Lady St. Mary remains rich with features that span across the centuries. To name a few are; the unique 12th century hexagonal lead font, a 13th century stone coffin, two military effigies, an oak pulpit (1882), and the grave and memorial tablet of county historian Rev. John Hutchins. 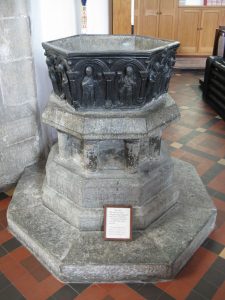 Lady St. Mary’s Anglo-Saxon origins will always remain significant to Wareham Town, regardless of the evolution of the Norman-Gothic building we see today.