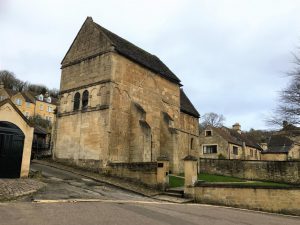 Erected in the historic town of Bradford-on-Avon lies a ‘hidden jewel’ of the west country of England, its style of architecture is from a time that is mostly forgotten by the average citizen. Bradford’s ‘hidden jewel’ is a church dedicated to St Laurence; one of the seven deacons of Rome, and was martyred in the persecution of the Christians that the Roman Emperor Valerian ordered in 258 AD. However, St Laurence has become a happy surprise for an Anglo-Saxon enthusiast, as England is not blessed with an abundance of surviving Anglo-Saxon buildings, especial one in this good condition. Though this archaic building has had some restoration over the years, it is still remarkable how much has survived and this church dedicated to St Laurence is England’s most completed Anglo-Saxon building of its type.

Bradford-on-Avon (also known as Bradford-upon-Avon) is 8 miles southeast of Bath in the county of Wiltshire. The centre of the town grew up around the ford across the river Avon, hence the origin of the town’s name “Broad-Ford”. The town is first mention in the Anglo-Saxon Chronicle under the year 652 AD when Cenwalh, the West Saxon king of Wessex, is reported to have fought a battle at Bradanforda be Afne. However, the chronicle gives no detail about who he fought or what the outcome of the battle was. Historians speculate Cenwalh fought either the native Celtic Britons or the Angles of the kingdom of Mercia. Until England became unified, Bradford was right on the frontier between the kingdoms of Wessex and Mercia.

The lack of surviving Anglo-Saxon buildings was due to most of them being constructed with timber and thatched roofing. Perpetual internal warfare and the invasions from the Norsemen (Vikings) consequently led to many towns or cities being destroyed and burnt to the ground – despite the restoration of destroyed settlements, wood buildings in general do not survive from this period. The surviving Ecclesiastical buildings, however, are constructed out of stone and brick, except for one timber church, and in some cases show evidence of re-used Roman work. At least fifty churches are of Anglo-Saxon in origin with having major architectural features, although in some cases the Anglo-Saxon part is small and noticeably altered. After the conquering by the Anglo-Saxons you would expect them to live within the old Roman cities, but they were essentially agrarian people who preferred to build small towns near their centres of agriculture; fords across rivers and sea ports for trading and fishing. 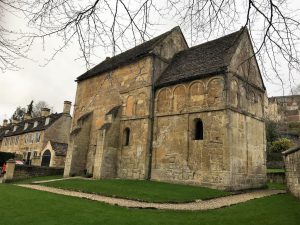 St Laurence is a well-preserved example of an Anglo-Saxon church-building before the Norman conquest had stamped their style throughout England; it’s tall and narrow with small windows, these characteristics are unmistakably Anglo-Saxon. St Laurence has a nave, chancel and a porticus (porch-wing) on the northern side and a probable southern porticus, which seems to have had an underground room that was replaced at some time before the beginning of the 19th century. On the left side of the below photographs is the north porticus. The right side shows the outline of the south porticus. 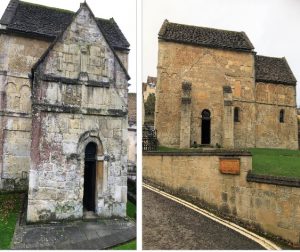 Historian William of Malmesbury, who was the foremost historian of his time in the early 12th century, documents the church of St Laurence still standing in the 1120’s. Though he thought it dated back to the time of St Aldhelm (d. 709 AD) who was a relative of king Ine of Wessex and a renowned scholar of his time. In 675 AD, Aldhelm was appointed the first Abbot of Malmesbury and around 705 AD, was also appointed to the bishop of Sherborne. His elevated reputation enticed scholars from far and wide, and they travelled great distances to learn from him at his school in the abbey of Malmesbury. Furthermore, Aldhelm founded two other monasteries as centres of learning at Frome, Somerset and Bradford-on-Avon, Wiltshire. St Laurence is regarded as his and may have been part of the location of his monastery at Bradford, which was located parallel to St Laurence, but is replaced by today’s Holy Trinity parish church from the 12th century. Aldhelm’s reputation even graced the court of Pope Sergius I, where he graciously accepted an invitation to travel to the centre of western Christendom at Rome.

A charter from king Æthelred the Unready (Æthelred II) granted Bradford to the nuns of Shaftesbury Abbey in 1001 AD, and it is believed St Laurence was designed to house relics of king Æthelred’s half-brother, king Edward the Martyr, who was originally housed with the nuns at Shaftesbury Abbey – the custodians of his body. Æthelred’s charter would suggest that St Laurence coincided with the above dates of its architectural style, rather than William of Malmesbury’s reported original date (around 700 AD). This might help explain why such a small grand building was erected. Although the existing church seems all or almost all Anglo-Saxon, some of its restorations included removing of stairs inside and filling in some windows. 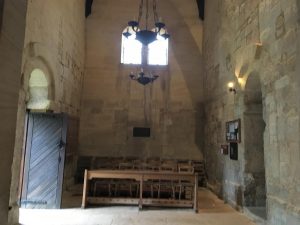 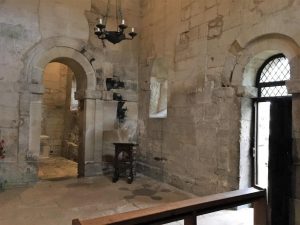 Some time later St Laurence was lost amidst other buildings including a school master house and only came to notice again in the nineteenth century, when it was rediscovered in 1856 and restored in 1870 to 1880. After some restorations, the church once again became used as a place of worship and was designated a grade I listed building in 1952. Today, St Laurence is used as part of the congregation of Holy Trinity church and hosts a couple sermons a week; other Christian groups use its premises as well.

Apart from the Church of St Laurence, Bradford-on-Avon has numerous buildings of historical significance to offer, and I encourage you to make the journey to this little town, where I know you’ll find great solace in stumbling across the ‘Hidden Jewel’ of the west. Though tucked away in Bradford’s town centre, St Laurence’s shadow casts a big reminder to us all that we still have a profound connection to our Anglo-Saxon ancestors..