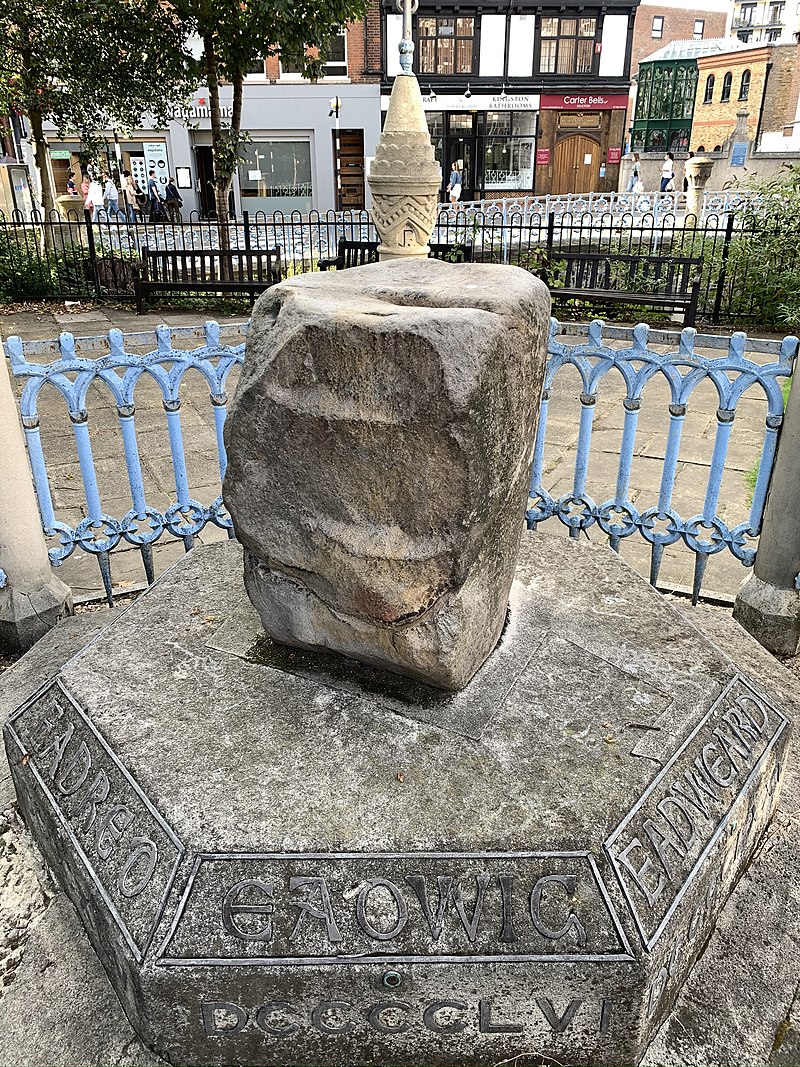 The coronation stone was used in ceremonies for the royal consecration of Kings from the Kingdom of Wessex during the 10th century, in Kingston-upon-Thames – a royal demesne manor. According to tradition the ceremony of coronation was performed on a large stone block, where statues of several monarchs were long preserved near the spot in the Chapel of St. Mary.

Although there is only some evidence that Edward the Eder, Edumd I, Eadwig and Edward the Martyr being consecrated at Kingston, one could speculate that other coronations could have taken place, but their documented account has been unfortunately lost to the memory hole of history.

These seven kings are from the royal dynasty of the House of Wessex and were historically styled as the Kings of Wessex. King Edward the Elder, or Eadweard cyning in Old English, was styled ‘Kings of the Anglo-Saxons’ (Anglorum Saxonum rex) in which he continuing the title that his father, Alfred the Great, created after Æthelred, Lord of Mercia, accepted West Saxon lordship. This new title represented a new polity of all the English people (Anglo-Saxons) who were not under Viking rule.

In the next succession to the throne, Edward the Elder’s son, King Æthelstan, conquered Viking York in 927 AD and hence forth adopted the title ‘King of the English’ (rex anglorum), in recognition of his rule over England. Therefore, the Coronation Stone is regarded as the coronation of the ‘Kings of the English’.

By the late 17th century, visitor to the chapel of St Mary had recorded the interior containing paintings of the Saxon kings who were consecrated, according to the website of the chapel’s current ecclesiastical building, All Saints Church; whereas Samuel Lewis’ A Topographical Dictionary of England (1831) states they were statues. All Saints Church was built next to the chapel in 1120 and outside the south door are some outlines marked by stone, which are the remains of the Saxon church.

The Chapel of St. Mary collapsed in 1730 but the Coronation Stone was recovered from the ruins  and placed outside the Town Hall (the Market House today in the Market Place) where it was used as a mounting block until 1850. It was move to its current location situated next to the Guildhall in Kingston-Upon-Thames, the south west of Greater London. It has been preserved as a registered Grade I Listed Building since 1983.

This king-making stone is a natural sandstone block known as a sarsen stone, which is found in southern England, especially on Salisbury Plain and the Marlborough Downs in Wiltshire, and in the county of Kent. This ancient sarsen stone block stands 3  feet high and is set on a granite base with the inscribed names of the kings traditionally crowned upon it and encircled by cast iron railings and balustrade.

According to Leland, the town was built by the Saxons and appears to have derived its name from Kyningestun. In Old English, tūn is the masculine noun meaning ‘enclosure round house, yard, garden; manor, estate, farm’. es~tūn means ‘living on a manor; village; town or dwelling’; and cyning (kyning) means ‘king’. The excepted translation of Kyningestun (Cyningestun) is ‘King’s manor or estate’.

Thankfully the Royal Borough of Kingston-upon-Thames have payed homage to their royal roots, as the balustrade monument of the Coronation Stone is a reflection of a tradition which has long passed, and although some passers-by may think this old rock is insignificant, the rich history of Kingston will assure those passers-by that the monument has particular relevance in English history.