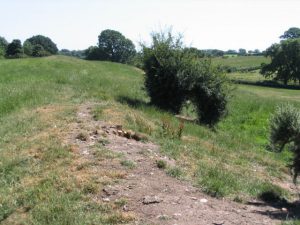 Wat’s Dyke is a scheduled monument (SAM) of 19 protected sections of a linear earthwork that stretches intermittently for approximately 40 miles (64km). Situated in the northern region of the Welsh Marches, the once north-western frontier of the Kingdom of Mercia.

The Welsh Marches contains a series of dykes that appear to have been built as defensive borders against the Britons. The most notable of them all is Offa’s Dyke. Typically, a dyke consists of a bank and a ditch – with regards to the arrangement of Wat’s Dyke, the bank is situated on the eastern side, whereas the ditch is situated on the western side. This tells us that the design of the dyke is facing towards Wales and therefore was built to defend the Anglo-Saxon lands to the east.

However, there has been a long-standing confusion in academia about the separate identity of Offa and Wat’s Dyke, due to the number of placenames denoting ‘Offa’ which can be found along the route of Wat’s Dyke, including Bryn Offa in Wrexham and Clawdd Offa in Sychdyn, Fintshire.

Some archaeological evidence concerning other dyke’s have shown a palisade or wall being added as fortified additions, a prime example can be found on a section of Offa’s Dyke; whereas a published section from Sychdyn, Flintshire, seems to show remnants of a timber palisade between the bank and ditch of Wat’s Dyke. This feature suggests a resemblance of a Roman turf-and-timber fort rampart, otherwise there is no indication of a palisade or wall being added to the fortifications of Wat’s Dyke.

During the late or sub-Roman period, a number of hillforts, for example, Old Oswestry in Shropshire, were reoccupied and incorporated to strengthen the dyke’s defensives. They also used the natural features of knolls and ridges to give the defenders a clear view of the west. These features appear as if it allowed its defenders to have a clear viewpoint of the uplands while also restricting movement across the lowlands from anyone approaching from the west. 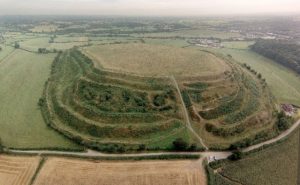 The monument of Wat’s Dyke runs from Basingwerk Abbey by the Dee Estuary in Flintshire to the River Morda at Maesbury in Shropshire – an important Mercian estate of Meresbyrig. The earthwork passes Wrexham, Ruabon, Gobowen, Yr Hên Dinas (Old Oswestry hillfort) and Oswestry; situated mostly parallel to the east of Offa where the two earthworks are less than 0.621* miles (1km) apart at the village Ruabon.

Sir Cyril Fox’s survey, where the southern end of the Dyke meets the River Morda, provides evidence that the river had been artificially straightened at this point by a distance of approximately 2.485* miles (4 km). This perhaps is the earliest post-Roman example of hydraulic engineering in Britain, which coincides with examples of contemporary continental defensive canals such as the Viking Kanhave canal in Denmark.

The dating of Wat’s Dyke

Frustratingly, the dating of Wat’s Dyke has been met with controversy despite the work that has been carried out from historical study, artefactual assessment, or scientific dating methods; some experts from their respective fields have vehemently denounced opposing hypotheses, thus the earthwork itself has unfortunately remained inconclusively dated.

Although some scholars may attribute Wat’s Dyke to the reign of King Offa (AD 757 to 796), the locality of Wat’s Dyke is situated more easterly compared to Offa’s Dyke, suggesting Wat’s Dyke was built by an earlier Mercian King before the territory of the Mercians slightly expanded further westwards, hence the reign of King Æthelbold is credited to be the patron of the dyke’s construction.

Another possible date has been suggested in the reign of the Emperor Septimius Severus in AD 197 to 211 by Steve Blake and Scott Lloyd, although this date is generally dismissed.

In 1997, excavations were conducted at Maes-y-Clawdd, Oswestry, where Hugh Hannaford obtained a single radiocarbon date from a hearth or cooking fire; which resulted in the calibrated date ranges of AD 411 to 561 (1 sigma) and AD 268 to 630 (2 sigma).

However, a single radiocarbon sample is considered insufficient and does not hold up to scientific scrutiny, given the huge margin of error that is implicit in both the recovery of the sample and the dating method itself.

Thus, opponents of radiocarbon dating argue that extrapolating the radiocarbon determination is an unreliable process resulting in a statistical approximation to the age of a sample. Furthermore, it must be pointed out that Hannaford’s sample itself was recovered beneath the bank and therefore would predate the construction of the dyke.

A broken annular loom-weight from the middle Anglo-Saxon period (AD 650 to 800) was found at an excavation site at Mynydd Isa, Flintshire by W J Varley in 1957. Recovered from on top of a patch of burnt clay, interpreted by the excavator as the base of a hearth, which in turn laid above a 50 mm thick primary fill of the ditch, suggested by the excavator to be “three decades of less” older than the construction of the dyke itself.

Unfortunately, thermoluminescent and thermoremanent magnetic dating techniques had not been developed at the time of the excavation, otherwise this technique would have enabled a direct dating of the hearth from W J Varley excavation.

Consequently, due to a lack of an absolute date from artefactual assessment or scientific dating methods, David Hill suggests exploring the potential political history between individual Kingdoms on both sides of the dyke rather than the relationship between the Angles and Britons.

There is no evidence of Wat’s Dyke ever existing during the Reign of King Cœnred of Mercia (AD 704 to 709) however we do know Mercia was subjected to raids from the Britons according to a documentary source of Felix’s Vita Sancti Guthlaci, although he does not mention which kingdom of the Britons inflicted raids upon the Mercians.

Before King Cœnred’s reign, Mercia established themselves as the dominant kingdom among the Anglo-Saxons during the reign of two brothers, King Penda and King Eowa (c. 626 to 655). During this period Mercia was allied with the Kingdom of Gwynedd. Therefore, there was no strategical value of Wat’s Dyke during this period as Mercia was fighting for Dominance over the Anglo-Saxon Kingdoms.

However, during this period Shropshire and Cheshire was the territory of the Wreocensætna people, where according to Nick Higham, who argued persuasively, were a Briton Sub-Kingdom within Mercia. Effectively operating as a Briton buffer-zone which protected the core Mercian territories of the Trent Valley.

The date when Wreocensætna became completely subsumed within Mercia is not known. But is generally assumed to have occurred after the Battle of the Winwaed (AD 655), most likely somewhen in the late 7th century.

So, the northwest of Mercia was secured until the death of King Penda at the Battle of the Winwaed. Consequently, leaving Mercia in a period of turmoil as the victor, King Oswiu of Northumbria, annexed Penda’s kingdom.

The dominance of Mercia was restored when King Penda’s son Wulfhere (AD 658 to 675) returned his royal lineage to the throne of Mercia. Though it seems King Wulfhere did not return to his father’s alliance with the Kingdom of Gwynedd. During King Wulfhere’s reign, it appears that Cheshire became part of Mercia’s territory between the mid to the late 7th century.

Lastly, although the date of Wat’s Dyke is credited to the reign of King Æthelbald, it is also plausible and possible preferable that Wat’s Dyke was constructed between the reigns of King Wulfhere and King Æthelred I (AD 657 to 704) as the likelihood of Wat’s Dyke being intended to protect Cheshire.

The Date and Nature of Wat’s Dyke: A reassessment in the light of investigation at Gobowen, Shropshire by Tim Malim and Laurence Hays.